What are the ADA guidelines for the self storage industry?

To view the storage facilities kits, go to StorageDisabilityProducts.com  for today’s self storage owner  ADA’s scoping requirements. They provide a kit that is easy to install in your facility . New by ALC Construction

ALC Construction ADA ramp has 4 landings, one at the bottom, one at the top and 2 intermediate. All landing have 5′ clearance for change of direction and a slope less the 2% in every directions. The slope in between landing is under 8.3% in the direction of travel with a cross slope of les than 2%. A continues handrail was install with P on top and bottom of 12″ min.ALC Construction

The independent traveller using a wheelchair, or the tourist with limited sight, is facing challenges. He wants to travel the world, visit the highlights, book a flight with an airline and find great deals online for his favorite hotel. Without being dependent or being stopped by stairways, small bathrooms or other discomfort. But wait, where can you find information about accessible tourism that is reliable?The huge rainforest of websites offering information on accessible travel is just too large to visit. We offer a place where you find your favorite accessible hotel. One big lobby to lounge and many many rooms to chose.

hotelaccessibility.com news brought by  by ALC Construction Read More How it works.

During a workshop on Tuesday, roughly 20 people learned how businesses can avoid lawsuits that claim they violated accessibility laws for people with disabilities.

Hosted by the Valley Economic Alliance and California Citizens Against Lawsuit Abuse, the workshop was part of a roughly yearlong effort to get businesses and restaurants compliant with accessibility laws as Glendale and surrounding cities gear up to host athletes participating in the Special Olympics World Summer Games, said Michael Hadley of the Valley Economic Alliance.Read more…

CORPUS CHRISTI – By the end of April, Nueces County may be the first county in the state of Texas to have all its voter registration materials available in Braille, large print, audio and HTML formats. These alternate means to communicate is part of changing policies the county is recommending to get in compliance with the Americans with Disabilities Act. Read More

After receiving complaints about tables, chairs, sandwich boards and planters encroaching into the sidewalk right of way in downtown, the city is reminding downtown business owners that a swath 48 inches wide must be maintained under the Americans with Disabilities Act.

The McMinnville Downtown Association will be hosting a meeting at 8:30 a.m. Friday, April 17, at the Golden Valley Brewery &  Restaurant, to field merchant questions.

The ADA requires cities to maintain 48 inches of clearance so people can navigate sidewalks in wheelchairs.Read more…

Advisory 405.2 Slope. To accommodate the widest range of users, provide ramps with the least possible running slope and, wherever possible, accompany ramps with stairs for use by those individuals for whom distance presents a greater barrier than steps, e.g., people with heart disease or limited stamina.

405.4 Floor or Ground Surfaces. Floor or ground surfaces of ramp runs shall comply with 302. Changes in level other than the running slope and cross slope are not permitted on ramp runs.

This ramp was build by ALC Construction llc

ALC Construction llc is in the process of installing a curb ramp. Curb ramp elevation of 26″. ALC install wall on top of footing, rebar for slab on grade. #4 @12″ OC aggregate base for the concrete slab at ramp.

It didn’t look like much right then. The overcast sky combined with the interminable brown and gray of dirt path meeting concrete didn’t help much either, but in by spring 2016, this overlooked piece of land just north of Ventura Boulevard will be replaced with a $2-million Zev Yaroslavsky L.A. River Greenway Trail, a new half-mile trail dotted with more than 4,000 native trees and plants including Coast Live Oak, Toyons, California poppy flowers. It would connect a 2.5 mile section of the river trail from Whitsett Avenue almost to the CBS Studios and a 2-mile section from Coldwater Canyon upstream.

“It will create five miles of continuous pathways, the longest in San Fernando Valley,” said Esther Feldman, President of Community Conservation Solutions (CCS), the non-profit organization who led the development of the project, addressing a crowd of more than 140 people. CCS also helped piece together the public and private funding to realize the trail. Funding came from the California Natural Resource Agency, Santa Monica Mountains Conservancy, Caltrans, and Supervisor Zev Yaroslavsky’s discretionary Proposition A Regional Park and Open Space fund. Apart from those, the city of Los Angeles and the Studio City Residents Associated has also committed money.

Qualified job candidates with disabilities now have a direct connection to the employers that are actively recruiting them. The Think Beyond the Label Online Career Fairs create a unique forum and experience for you to engage real time with employers who are ready to hire! People with disabilities and the businesses that employ them are leading, innovating and evolving the workforce. Get registered to participate today!

About Think Beyond the Label

Think Beyond the Label is a public-private partnership that delivers information, outreach and resources to businesses, job seekers and the public workforce system to ensure greater recruiting and hiring opportunities for job candidates with disabilities. Our purpose is to better inform, connect and communicate with all stakeholders in the disability and employment system so that we can be a catalyst for a more inclusive workforce. Think Beyond the Label is powered by Health & Disability Advocates (HDA), a nonprofit that has been a driving force behind building smarter systems of access to health, disability employment and income supports for twenty years.

There’s a name change in the works for the Museums of Los Gatos–it’s NUMU, and it stands for the New Museum Los Gatos that opens next year at the civic center. The art museum on Tait Avenue and the history museum at Forbes Mill will be combined into one facility, taking over the old library that has been mostly vacant since February 2011.

Earlier this month the town council appropriated nearly $1.4 million to upgrade the old library building with new heating, air conditioning, restrooms, lighting and an ADA-compliant elevator.
“This project has several themes,” parks and public works director Matt Morley said. “The most important of these may be the focus on accessibility–ensuring through the installation of a new elevator, a revamped stairwell and reconstructed restrooms that all patrons have access to the full space.” Read More… 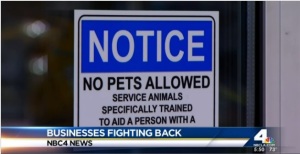 Nearly 8 million lawsuits were filed against business owners last year, taking what some consider a hefty and unfair toll on the economy. Now, one group is demanding an end to “lawsuit abuse.” John Cádiz Klemack reports for the NBC4 News at 6 p.m. on Friday, Sept. 26, 2014.

A slew of lawsuits filed against small business owners have led to settlements that some owners say make them feel more like the victims.

Recently, I had the opportunity to give a presentation to the Certified Access Specialist Institute in California (CASI) on Assistive Listening Systems and compliance with the Americans with Disabilities Act (ADA). As one of the co-founders of Listen Technologies, I am a passionate advocate for Assistive Listening Systems. My recent presentation to the specialists at CASI allowed me to share my thoughts on why awareness of the ADA is not only necessary but also how it can be beneficial. Read More

Disability awareness month may be over, but that does not mean we cannot give the issue our attention.

West Liberty University currently holds to the standards of the Americans with Disabilities Act (ADA).

This involves accommodating student needs physically and mentally. Some examples include elevators and ramps around campus as well as the Office of Tutoring and Accessibility Services.

OTHER FEDERAL ADA AND DISABILITY RESOURCES

WHAT IS IT? Work at the corner of Third and Center streets in Hannibal was underway Tuesday morning in preparation for the installation of an ADA-compliant sidewalk ramp on the intersection’s southeast corner.
While most of the downtown improvement project’s work has been focused on North Main Street in recent months, on Tuesday morning a small part of the project was taking place on the southeast corner of the Third and Center street intersection.
According to Brian Chaplin, project manager for the city, a ramp compliant with Americans with Disabilities Act regulations was being installed at the location.
“We’re making it ADA (compliant) to match the other three intersections in this block,” he said.
ADA-compliant ramps were already in place at the Third and Center intersection’s other three corners.

Complying with federal accessibility regulations will cost the City of Logansport more than $8 million, according to a recently issued report.

A consulting firm hired this summer by the city researched the cost of aligning with federal regulations and making Logansport public facilities more accommodating for people with disabilities.

Like communities all over the country, the city is taking steps to comply with the Americans With Disabilities Act passed by the U.S. Congress in 1990. The civil rights law prohibits discrimination based on disability, part of which concerns ensuring counties, cities and towns provide ways to make public facilities accessible to those in wheelchairs and who have other disabilities.

News10 looks into how some attorneys who specialize in Americans with Disbilities Act compliance violations do business.

SOUTH SALEM, N.Y. — The South Salem Presbyterian Church is working on installing automatic doors to the main entrance of the church and the sanctuary.
The congregation was founded in South Salem in 1752 and since construction in 1826, the “White Church on the Hill” has been the focal point of the hamlet and the greater community of Lower Salem (Lewisboro).